Who is Dr. Yvette M. Whitton? 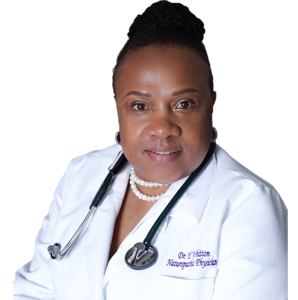 Dr. Whitton is a Connecticut Naturopathic Physician and the owner of Adonai Optimal Health and Wellness, a Naturopathic Wellness Facility in Monroe, CT. Dr. Whitton received her undergraduate degree from the College of New Rochelle (CNR), in Westchester County, New York, where her major course of study was Biology Pre-medicine. She was a recipient of a Bachelor of Science degree in Biology from CNR, and would later go on to become a Science teacher in New York City and Westchester County public schools.

Dr. Whitton received an informal education in natural medicine from her mother, whose knowledge of herbal medicine was acquired by means of her West Indian and Cuban ancestry. She recalls watching in awe as her mother would prepare a myriad of herbal preparations which she would use successfully to treat her family.

As a result of her childhood experience, Dr. Whitton established a business in New York City which she called Eve’s Botanicals, but later she realized the necessity for formal training in order to satisfy the deep seated desire to heal chronic, debilitating diseases, including cancer, by natural means. Ultimately, after many years of service teaching earth science and biology, Dr. Whitton would depart from the New York State Board of Education, in order to pursue an education in Naturopathic Medicine and would shortly thereafter, enroll in the University of Bridgeport’s College of Naturopathic Medicine (UBCNM), in August, 2004.

As part of her educational experience at UBCNM, Dr. Whitton completed 2 years of clinical practice. In addition, she completed a preceptorship program which included clinical rotations at Cancer Treatment Centers of America, PA. Dr. Whitton would later receive practitioner training in Nutritional Enzyme therapy at the Gerson Institute in San Diego, CA. Dr. Whitton continues to embark upon extensive research, and educational training in natural alternative treatments for cancer. She became personally invested in naturopathic oncology after losing her mother to pancreatic cancer. Believing in the innate ability of the body to heal it self, Naturopathic oncology offers a holistic approach to healing, placing emphasis on the patient, not the disease or its associated symptoms.

Applied treatment methods include Identification of the causative agent(s); Detoxification and elimination of carcinogenic toxins through mechanisms that enhance the elimination pathways; Correction of nutritional enzymatic deficiencies; Management of mental, emotional and oxidation stress; Optimizing the immune system; and Restoring harmony between the mind, body and spirit. The result is an interruption of the pathological process and restoration of health. Dr. Whitton is a member of OncANP (Oncology Association of Naturopathic Physicians) as well as SIO (Society of Integrative Oncology). Her goal is to assist in minimizing the incidences of cancer through community empowerment regarding lifestyle, health care options, and to encourage cancer prevention through public awareness and education .

Dr. Whitton dedicates herself on optimizing health by empowerment through education and environmental awareness, she believes that through the integration of conventional and alternative treatments, collaborative efforts can be made toward optimizing clinical outcomes for the cancer patient and providing the safest, most effective, evidence based options in cancer care.

Accessibility by WAH
Call Us Text Us